Coal Ain’t Coming Back & Neither is AM Radio 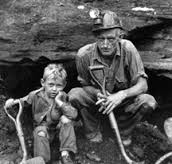 I lived in Kentucky for 7-years.

But when it comes to jobs, solar & wind-energy jobs are growing 12 times as fast as the US economy. This has all been happening over the last 10-years or so. Renewable-energy jobs grew at the rate of 6% while fossil-fuel jobs declined at 4.5% from 2012 to 2015 according to Business Insider who also notes that the average number of employees at US coal mines dropped by 12% in 2015.

The most recent statistics (2014) for the coal industry say 76,572 people are employed mining coal. That includes miners, office workers, sales people and others who work at coal-mining companies. In 1980, the industry employed about 242,000 people.

But to put the coal industry employment in perspective, there are more people employed in education in Kentucky than in coal. And the Washington Post compared the number of people employed in coal to other industries and reports: “Although 76,000 might seem like a large number, consider that similar numbers of people are employed by, say, the bowling (69,088) and skiing (75,036) industries. Other dwindling industries, such as travel agencies (99,888 people), employ considerably more. Used-car dealerships provide 138,000 jobs. Theme parks provide nearly 144,000. Carwash employment tops 150,000.”

In fact, more people are employed in RADIO (94,584 people) than in the mining of coal.

When I hear people in coal country cheering about coal jobs coming back under a new presidential administration, I look to my own industry; radio. AM radio is like the coal industry.

America, to a large extent, was built on coal due to the industrial revolution. All of our great factories depended on coal to power their machines. Coal was plentiful and we had lots of it. It was coal’s time.

In the 1920s, AM radio was born. Nothing like it had ever existed in the world. While the telephone brought people together, one person to another person, radio would bring the masses together. Inc.put together a list of “The 25 Greatest Inventions of All Time” and radio was #2 following the wired telephone. The History Channel compiled its own list and it put the smartphone in the first position followed by radio.

The “Golden Age of Radio” is the period from the 1920s to the 1940s when AM radio was the main source of entertainment in American homes. It would be replaced by television in the 1950s.

The transistor and car radio would pump new energy into the radio industry to a young generation in the 1960s and AM radio would be “born again.”

The latest FCC (Federal Communications Commission) report as of the end of December 2016 shows that there were 4,669 AM radio stations on the air in America. Over on the FM dial, 16,783 signals now beat the airwaves (FM, FM educational, translators and low power FM).

In coal mining, the need for coal miners goes down every year. Today, mining for coal no longer means muscle hardy men in maze-like tunnels wielding picks and shovels. The coal industry has steadily been replacing those jobs with robotic machines that require far fewer miners but more computer engineers and coders.

The radio industry employs its own cadre of computer engineers and coders that allows for fewer folks to appear on more radio stations through automation and voice-tracking. Is what’s happening in radio broadcasting any different than what’s happening in coal; or any other industry today?

I grew up on AM radio.

AM radio was my world and the people who made the magic caused this boy to make radio a career.

But AM radio and those jobs are not coming back any more than coal miner jobs.

93% of Americans 12-years of age or older listen to radio every week.

What percentage of those are listening to AM?

As AM radio stations add FM translators, do you think that number will grow again?

Sadly, AM radio is to broadcasting as coal is to power generation.