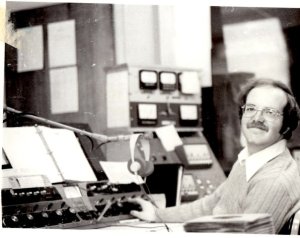 I knew from the time I was a little boy, I wanted to be on the radio. I built a radio station in my parent’s basement and broadcast to my neighborhood using AM & FM transmitters I bought at Radio Shack. Besides being on the radio, the other thing I wanted to do was drive a car.

I was fortunate that my opportunity to be on the radio happened in the 10th grade in high school and when my moment came, my only thought was “it’s too soon,” I need more practice, I’m not ready yet.

When I learned to drive a car and that day came when it was time for me to drive away by myself, I thought, “it’s too soon.” When I made the transition from radio disc jockey into radio sales and the day came for me to go out on my own and begin calling on businesses to sell radio advertising, that day came WAY too soon.

I was successful in radio sales and they made me sales manager. Too soon I thought, but sales manager led to station manager and then general manager of the AM side of an AM/FM combo. The general manager of the FM side of the operation was also part-owner so I always thought of myself as the “baby gm.” Then the day came when the majority owner of my radio station offered me the position of general manager in Atlantic City at another pair of radio stations he owned. Now I would have to make it on my own. No more baby gm, I would be the only gm. Too soon!

After 42-years in radio, thirty of which were as a market manager, I made a career change into higher education by becoming a professor at a university. I spent the summer preparing and planning every lesson in every class I would teach that fall. When the first day of classes arrived, my only thought was – you guessed it – too soon.

What’s interesting about everything I’ve share with you up to this point in time is that nothing was really life threatening. Even getting married and having our first child (too soon times two) was not life threatening. Having the second child – seemed too soon since we were just getting good a taking care of one baby – wasn’t life threatening.

Then I took flying lessons.

I found I was really enjoying my flying lessons. Those weekend lessons over South Jersey, along the beaches in the summertime were exhilarating. I was making great progress. Keeping the nose up, learning to trim the aircraft, scan the horizon for other planes in my proximity and learning how to land in the strong cross winds that came in off the ocean at 90-degrees to the only runway at Ocean City, New Jersey’s airport.

And then it happened. I had just landed the plane when my flight instructor hopped out and said, take her around again and slammed the door. Gulp!

I powered up the engine to full throttle and picked up airspeed down the runway and took off all by myself. All the while thinking, it’s too soon. I hope I can do this.

I’ve always heard that a student pilot’s best landing is their first one after their first solo flight. That was certainly the way it was for me. That single engine Piper landed ever so softly onto the tarmac and I taxied to the terminal building in a moment I will always remember. (The moments that I would almost not live to tell about would come much later in my brief flying career.)

The point of my story is that everything that happens to us, which will help us to take the next step forward in our careers, our business, our education and our life always seems to come too soon.

We will never really feel as prepared as we think we should be. Do it anyway.

Seth Godin puts it this way:

“There is a fundamental difference between being ready and being prepared.

You are more prepared than you realize. You probably aren’t ready, and you can’t be ready, not if you’re doing something worthwhile.

Because we always do our best work and take our turn before we’re ready.”