I didn’t grow up watching “Mister Rogers Neighborhood.” The television in my family’s house was connected to two different antennas that each picked up a single television station. One TV station was affiliated with the NBC television network and the other with the CBS television network. My childhood mentor was Captain Kangaroo. Bob Keeshan’s broadcast was on commercial television, so I was also exposed to products such as pre-sweetened Kool-Aid, where the “sugar, sugar, sugar…is already in it.” Sad, that I remember that sell line over 50-years later, more than any other lesson taught by that show.

I think I really became aware of the impact that Fred Rogers’ telecast made on children when in 2003 my oldest son Chris called me and said, “Dad, today’s a very sad day, Mister Rogers died.”

But my quest to learn more about this man really came about when I viewed the documentary on Netflix called “Mister Rogers & Me: A Deep & Simple Documentary Film.”

“I feel so strongly that deep and simple is far more essential than shallow and complex.” 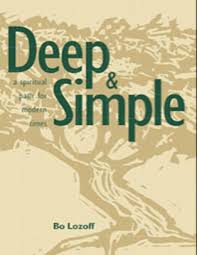 Fred Rogers learned of this concept from a friend, mystic, activist and author in Durham, North Carolina by the name of Bo Lozoff. Bo wrote a book titled “Deep & Simple.” I bought a copy of the book from the Human Kindness Foundation, which Bo and his wife Sita founded. I wanted to read about the three core tenets of a deeper life that inspired Mister Rogers.

On May 1, 1969, Fred Rogers appeared before Senator John Pastore’s Senate committee to explain why they should continue to fund PBS (Public Broadcasting System) for another term at a cost to the taxpayers of America of twenty million dollars. If you’ve never seen Mister Rogers’ testimony, I encourage you to stop, and take a moment to view it now. Click HERE

What Fred Rogers did before the Senate hearing, was the same thing he did on his TV program, in interviews and in life. He was himself. He was being real.

His truthfulness and sincerity were never in question.

In May of 2002, Fred Rogers was invited back to his alma mater, Dartmouth, to give that year’s commencement address. It was powerful in its deep and simple message. Here are some of the things he said that day, that I feel have importance to the radio broadcasting industry.

Mister Rogers told one his favorite stories about the Seattle Special Olympics, where nine contestants, all of them physically or mentally disabled, were to run a 100-yard dash.

The starting gun fired and all of them began to run. One little boy stumbled, fell and hurt his knee. He began to cry. Hearing him cry, the other eight children turned around and ran back to him. They picked him up, linked arms and all joyfully crossed the finish line at the same time.

What makes this story so powerful, Fred Rogers told the graduates, was that

“Deep down, we know that what matters in this life is more than winning for ourselves. What really matters is helping others win, too. Even if it means slowing down and changing our course now and then.”

Radio used to operate with this everybody wins type of esprit de corps, a feeling of pride, fellowship, and common loyalty, to its staff, its advertisers and its community of license.

Fred told the graduates that day that each one of them is unique and special. No one will ever be like them.

Radio stations used to be unique and special when I was growing up. DX’ing (listening to distant AM radio signals via the night skywave) was a cornucopia of theater for the mind. Every station was unique. Every radio personality was special. To not listen to any one of them left the radio listener with a sense of FOMO (Fear Of Missing Out).

Fred Rogers said that he was very much interested in choices.

Radio has been constantly faced with choices over its nearly 100-years.

When television was born, radio chose to move in new directions and created new kinds of programs that would engage the next generation of listeners.

“What is essential is invisible to the eye.”

Fred Rogers told those Dartmouth students that commencement day, they were graduating because of the people who helped them become the people they are.

“Anyone who has ever graduated from a college, anyone who has ever been able to sustain a good work, has had at least one person, and often many, who have believed in him or her. We just don’t get to be competent human beings without a lot of different investments from others,” said Mister Rogers.

This past week, news spread that Brother Bill Gable had died. For many of us, it was the time he broadcast over The Big 8 – CKLW out of Windsor-Ontario, Canada that endeared him to our hearts. His best friend, Pat Holiday shared a story about what made Brother Bill and the rest of the air personalities at CKLW essential radio listening. Pat wrote:

“Each day on CKLW the big deal was the show opener. We’d all try to outdo each other. No, ‘Hi…how you doing?’ stuff. It HAD to be larger than life. We’d all do our best to do some crazy or funny or amazing thing to set the tone for the rest of the show. Something mesmerizing. So much that you’d think, ‘Holy shit that was great. How am I going to top that?’”

This is in such stark contrast to what we hear over the radio today.

George Johns shared a blog post from his radio friend Bob Christy that was titled “It’s Over…” The blog was written by Bob after he had spent a couple of hours listening to New York City’s #1 radio station. You can read the complete blog article HERE

The essential element for most radio listeners, the air personality, was throttled to four mic breaks per hour. Worse, the personality sounded uninterested according to Christy and the only local story he shared was ripped off the internet.

Bob ends his post by asking, “So is it fair to judge a station by listening to one break or for ‘only a few hours,” hell yes it is. The audience will give you one shot, you better be ready and make it count.”

Won’t You Be My Listener?

Radio has choices. It will either work to become essential in people’s lives again, or it won’t. Will it continue down the path of being shallow and complex, or return to its roots, being deep and simple? Great radio is more than anything you can see, hear or touch. Great radio is community and companionship. Great radio is LIVE and engaging to its target audience.

I wish for the people in today’s radio industry to possess the wisdom, strength and grace to make the choices the industry needs, to make it the best radio it can be, going forward.