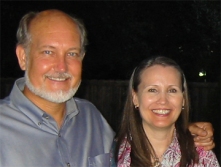 When Roy & Pennie Williams were asked how they measured the success of The Wizard Academy, they responded that it came down to three things.

How often they heard of academy students who took what they learned, and then put that into action back home, making a major difference.

How many new students came to the academy based on the enthusiastic recommendation of a person who had been to The Wizard Academy.

In essence, it came down to getting results, having return students and earning referrals.

When I read Roy & Pennie’s metric for measuring success of The Wizard Academy, it reminded me of the same principles I used when I began my radio sales career 40-years ago.

For every new client I called on, I wanted to leave with one of two scenarios: a) make a sale or b) make a friend.

I learned very quickly in my sales career that people buy from people they like and know. They buy from their friends – a trusted source.

Once a client made a purchase of an advertising schedule, I needed to create advertising copy that told the client’s story that was uniquely their own. I needed to make a difference in their cash register rings. I needed to work at building a sustaining relationship with this new business.

I was taught that buying advertising was like getting married. It wasn’t a one-time thing, but an on-going relationship, that should be nurtured and grown.

No one says, “I’ll try marriage for a week and see how it works.”

They make a commitment.

Advertising, to be effective, takes that same kind of commitment.

So, all the advertising contracts I sold had no-end-date on them. They would air until the client said they wanted to cancel.

When your hard work for a client makes a real, positive difference, then you are in the position to ask for referrals. Satisfied customers are more than happy to refer you to other business people they are friends with, and who they would like to see enjoy the same positive advertising benefits they have experienced.

When you move from cold calling (calling on business people you don’t know and who don’t know you) to working from referrals, the sales process becomes more fun and much more productive.

People love to be with a winner.

If you build your sales career in this manner, each success story will bring you more referrals from people who believe in you.

Sales is, after all, the transference of confidence.

No one can better tell your success story, than the people who’ve experienced their own success, because of you.