Is Radio Biting Off More Than It Can Chew? 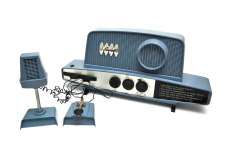 There are lots of items in the news these days about what the radio industry should be doing. Streaming, podcasting, smart speaker accessible etc. The one thing I hear little talk about is, improving the core product and focusing on what the listener is seeking.

If you think about it, the radio ecosystem, AM/FM radios, have not seen any real changes in decades. Oh, there was the introduction of HD Radio – introduced around the same time as Apple introduced the iPod (R.I.P. 2001-2014), but listeners never really understood the need for it. HD Radio was embraced by commercial broadcasters when they learned they could feed analog FM translators from HD Radio signals and have more FM radio stations in a single marketplace. This was hardly listener focused and actually chained the radio ecosystem to old analog technology.

In the beginning, radio was a way to wirelessly communicate with other people using Morse Code on spark gap transmissions. Guglielmo Marconi built a radio empire on this technology.

David Sarnoff, a skilled Morse Code operator and a Marconi employee envisioned a “radio music box” and wrote a memo about developing a commercially marketed radio receiver for use in the home. It wasn’t until after World War I, when Sarnoff proposed the concept again, this time in his new position as general manager of the Radio Corporation of America (RCA), that it would see the light of day.

Sarnoff would demonstrate the power of radio by broadcasting a boxing match between Jack Dempsey and Georges Carpentier. In just three years, RCA sold over $80 million worth of AM radios, and not soon after created the National Broadcasting Company (NBC).

America’s first attempt at regulating radio transmission was the Radio Act of 1912, that was enacted after the sinking of the Titanic. This law didn’t mention or envision radio broadcasting.

As radio broadcasting began to grow in the 1920s, then Secretary of Commerce Herbert Hoover would begin the process of trying to regulate the limited spectrum that everyone now wanted a piece of.

The Radio Act of 1927 was America’s first real attempt at regulating radio broadcasting. The Federal Radio Commission (FRC) was then formed by this act.

It should be noted that the FRC operated under the philosophy that fewer radio stations, that were well funded and provided live original programs, were better for America than a plethora of radio stations providing mediocre programming. It was an idea that the major radio receiver companies championed.

In 1934, the Congress took another attempt at regulating broadcasting (radio & TV) as well as all the other forms of communication that now existed. The Communications Act of 1934 created a new regulatory body called the Federal Communications Commission (FCC). By 1934, radio broadcasting had evolved into a highly profitable business. Broadcast educator, Fritz Messere, writes: “Many of the most powerful broadcasting stations, designated as ‘clear channels’ were licensed to the large broadcasting or radio manufacturing companies, and the Federal Radio Commission’s adoption of a rigid allotment scheme, under General Order 40, solidified the interests of the large Broadcasters.”

The biggest and most well-funded broadcasters have been favored since the very beginning. What kept things in check until 1996 was the limit on the number of AM, FM and TV stations a single company could own.

Those limits would evaporate with President Clinton’s signing of the Telcom Act of 1996. Radio, as America had known it, would be over.

Now, for the most part, a single owner could own as many radio stations as their pocketbook could afford. Lowry Mays and Red McCombs, founders of Clear Channel Communications, would grow their portfolio of radio stations to over 1200 from the 43 radio stations they owned before the act was signed.

Radio Zoning The FCC is now considering whether to further loosen up the ownership limits of radio and TV stations in America. FCC Attorney John Garziglia recently wrote:

But there are widely-enacted municipal limitations on just about every type of local business. The limitations are called “zoning” – the permitting or prohibiting of certain uses in certain areas to protect the character of the community.

The FCC’s radio ownership rules can be thought of as a kind of radio zoning. In the same way as land-use zoning protects a community’s character, the FCC’s ownership rules permit or prohibit certain radio station combinations protecting the amorphous concept of the public interest.

With land-use zoning, communities maintain a distinct character, livability, aesthetic, and economic success by not bowing exclusively to the profit motive of land developers. Allowing several or fewer owners to own virtually all of the radio stations in the country would doom the specialness of our radio industry.”

I think John makes some excellent points and I would encourage you to read his complete article HERE.

Radio operators today can’t properly staff and program the stations they already own. What makes them think that will change if they own even more of them? Most radio stations are nothing more than a “radio music box” run off a computer hard drive, an OTA (over-the-air) Pandora or Spotify.

Former Clear Channel CEO, John Hogan, introduced the “Less Is More” concept when I worked for the company. While it actually introduced more on-air clutter, not less, the idea was neither new or wrong.

If owning more radio stations was the answer in 1996, then why in 2018 are we worse off than we were then?

Why was Jerry Lee able to own a single station in Philadelphia and dominate that radio market?

Why are many locally owned and operated radio stations some of the healthiest and most revered in America today?

The FRC wasn’t perfect, but the concept of “less is more” served America well for many decades. Fewer radio stations that provided high quality, live programming, operating in the ‘public interest, convenience and necessity’ and by virtue of that diversity of ownership, provided diversity of voice and opinions, as well as healthy competition.