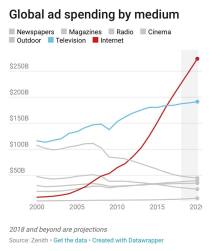 In the year 2020, commercial radio will celebrate its 100th birthday. Hopefully, by then, America’s two largest broadcasters will be out of bankruptcy. But before we light the candles and begin the celebration we need to face reality. Global ad spending, according to Zenith (see graph) will see newspapers, magazines, radio, cinema and outdoor all fighting to be the tallest ad-supported midget. TV will be marginally growing, but the internet will be the big winner; raking in more advertising revenue than, print, radio, cinema and outdoor combined. That’s sobering news.

Last week, I shared with you a “Readers Digest” version of a webinar I attended hosted by Kepios’ Simon Kemp. If you missed it, you can read it HERE

The essence of where things are headed will be influenced by the “next billion” people coming online. The “FLAAG” companies, Facebook-LinkedIn-Amazon-Apple-Google, are already in the process of having all of their interfaces, working on all devices, in the same way on a global basis. With a million new users a day joining the internet, mostly from underdeveloped countries, everything will be designed for the lowest common denominator.

Radio, Then vs. Now

Bob Shannon’s book “Turn It Up! – American Radio Tales 1946-1996” is a fascinating read. The legends of the radio industry share their own personal radio adventure as well as give their view on how radio is today. (Note: “today” being the mid-nineties when the book was being written.)

Chuck Dunaway said, “The formats haven’t changed in all these years – it’s just the music that changes.” “I still hear the stop sets falling in the same places and we’re still playing and programming to Arbitron (now Nielsen Audio), and not to the listener.”

Bill Figenshu noted that “when Wall Street started to pay attention to radio, it became more of a financial play and the corporations were turned over to the financial folks, who didn’t understand the value of local content.” “As a consequence, many radio stations, particularly those owned by large groups, sought to cut costs and localism, and being part of a community became a luxury; it didn’t happen everywhere, but it happened in lots of town and cities.” “It hasn’t been a good thing for radio or its listeners.”

That pretty much sums it up. Even after another decade since the book was written.

Radio hasn’t really changed but the world it operates in, has.

On Tom Taylor’s NOW, Jerry Lee is sharing his new book called “How to Grow Your Revenue More Than 20% by 2020.” In a recent headline, Jerry wrote:

“In Radio, we have two major problems. First, we are running far too many commercials for today’s audiences. Second, the commercials are awful. Our listeners can’t skip through the commercials. If they want to listen to their favorite station, they have to endure the seemingly endless commercial break or switch to another station that isn’t playing commercials at that moment.”

Sadly, the reality may be worse. 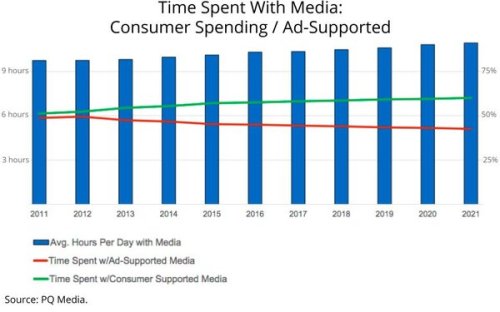 Joe Mandese says that “advertising is falling to the lowest share of time spent with media ever.”

The Speed of Adoption of New Technology 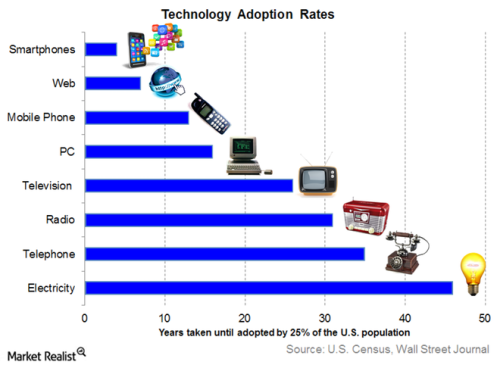 This graph shows how our world of technology adoption has picked up speed with each new innovation. But maybe even more important are the words Marshall McLuhan said about “the medium is the message.” McLuhan meant “that the form of a medium embeds itself in any message it would transmit or covey, creating a symbiotic relationship by which the medium influences how the message is perceived.” McLuhan was prophetic in realizing how the very medium itself can impact society, by not only the content it delivers but also by the characteristics of the medium itself.

You probably can come up with lots of examples yourself that demonstrate this observation by just comparing how newspapers, radio, TV, Facebook and Twitter, delivering the same content, influence how it’s received.

The radio I grew up in was not what’s commonly referred to as “The Golden Age of Radio.” That was the period of time before TV. I grew up in radio’s “2nd Golden Age,” one of a music based, youth-oriented radio. Radio that appealed to my emotions.

Radio that’s winning today, like Public Radio/NPR and Christian Radio, are touching people emotionally and appealing to things their listeners are passionate about.

Ignore people’s passion and emotion, and your radio station will die on the growing pile of media clutter.