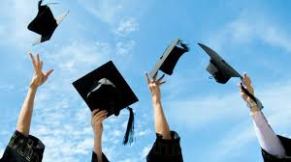 It’s graduation time. Invariably, these occasions call for someone to make a speech. Often these speeches are about life and achieving success. Each speech has a way of treading a path of being forward looking and how one can seize the future.

What Would He Say?

Travis Graham was a law student at the University of Tennessee. He had a reputation among his classmates as a hardworking student, but socially quiet. What he would say at the graduation ceremony as class valedictorian was a mystery to all. So, after several typically musty speakers, he rose to deliver his address. Audience attention was then a bit sharper. After the obligatory acknowledgments, he promised to take only two minutes of everyone’s time and got to the heart of his thoughts.

He Had No Idea Either

He started by acknowledging that he had had difficulty deciding what “wisdom” to impart at the ceremony. For inspiration, he consulted quote books and speaker’s guides but came away uninspired. He reviewed the cases and the law he had studied and found nothing he felt appropriate to the moment. In fact, he said, he had no idea of what hard-gained understanding-born-of-study he could share until that very morning when he was sitting at his kitchen table, having a breakfast of made-from-packaged-dough biscuits.

There, on the newly opened roll of refrigerated biscuit dough, he spotted the lesson he knew he and his fellow graduates had in common, and felt worthy of the occasion.

This advice, he was sure, would stand them in good stead all the rest of their lives. He continued after a dramatic pause, it went this succinct wisdom one better, by also advising, “BUT DO NOT FREEZE.”

And with that he thanked all assembled and returned to his seat.

Congratulations to all the graduates of the Class of 2018