Welcome to the Social Capital Age 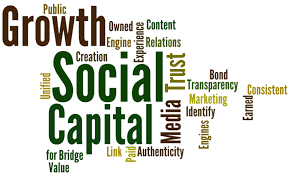 We live in interesting times. The internet has changed our world in a revolutionary way. In its current form the internet is now over twenty-years old. There are college students today that don’t know a period of time when there wasn’t an internet.

There are only five periods in world history where communication has undergone such a massive change to be called a “revolution.” The first would be the invention of the printing press and movable type. The telegraph and telephone would be the second time. The ability to take photos, record music and voice and create motion pictures would be third. Radio followed by television would be the fourth time and the digital/internet period – the period we are living in today – is the fifth communications revolution.

Each communications revolution brought with it a period of adjustment and made the world a little more connected. Entrepreneurs who could envision the future would leverage each media revolution to their economic benefit.

Once upon a time, people spoke of the electrical age and the computer age. You don’t hear anyone say that anymore. Slowly fading away are people calling things digital or internet. It’s when people begin to take a new innovation for granted that it begins to have social impact.

In the previous four media revolutions, technical capital is what separated the winners from the losers. What makes the fifth media revolution so confounding to media professionals is that every new media device sold today creates not only a media consumer but a media producer as well. By 2020 it’s estimated that there will be nearly eight billion people living on planet earth and 65% of them will be connected to the internet. That means there will be over five billion people who will be able to create content and distribute it over the internet.

“The moment we’re living through

is the largest increase in expressive capability in human history.”

Professor Shirky also says that as these new social media tools get technologically boring, they get socially interesting. In other words, as the value of technical capital goes down, social capital’s value increases.

On Tuesday, October 18, 2016 NPR reported that its multiplatform journalism has seen a tremendous audience growth. NPR President and CEO Jarl Mohn said it showed that NPR was doing a far better job of its public service mission, community engagement and local impact.

What NPR is very effectively doing is increasing the value of its social capital. It is focused on its listeners who have an appetite for strong reporting and a need to be in the know.

Today’s media landscape allows one to convene an audience, but not control them. It takes discipline to understand this change in our 21st century communications world.

Radio to my college students is anything that they can get through any media device that is primarily audio-only. Satellite radio, Pandora, AM, FM is all radio to them. Likewise is the idea of ecommerce, mcommerce or brick-and-mortar, for today’s consumer it’s just buying stuff they want, when they want it.

Birds of a Feather, Flock Together

The concept of reaching a mass audience through target demos is over. It’s no longer about age, as it is state of mind. Today the game is about reaching a unique audience that is socially connected by their interests. Shared interests are the new “local.” The future is in the careful creation of the ad itself, which speaks to the interests of the consumer and then placing it in a media environment that is in sync with the product or service being presented. Podcasters are doing this quite effectively.

Media that defines what it is, monitors all content to be consistent with that definition, will be the media that wins for both its audience and its sponsors.

3 responses to “Welcome to the Social Capital Age”