United Airlines went from the penthouse to the outhouse for customer relations.

This is not another article about the incident itself or how it was handled. There are enough of those on the internet already. This article is about you and your media property in a social media internet connected world. We’re living on a knife edge. Only a word or thought vocalized away from disaster.

Every week when I post a new article on this very blog, that thought runs through my brain.

Don Imus was a big follower of Rutgers Women’s Basketball (who knew, right?) when he uttered a characterization of the players that temporarily ended his career.

Dan Rather reported a story about W’s military service that ended his tenure at CBS and one that many still hold against him all these years later. Ironically, he’s now on more TV channels than before it happened and has taken the social media by storm with his articles.

Brian Williams lost the anchor chair at Nightly News for embellishing and now is back on the cable channel that he worked while waiting for his chance to take over NBC’s evening newscast.

They spoke with Kate’s nurse, Jacintha Saldanha, who believed who they said they were and put the prank call through to the Duchess. The whole comedy bit for the Southern Cross Austero owned radio station morning show was pre-recorded and even approved by the company’s lawyers before it was broadcast the following day.

When the nurse committed suicide three days later, the radio careers of Greig & Christian would be terminated with 2DAY FM.

Let me show you a picture I took of three flight attendants because of how they treated their passengers on my flight. 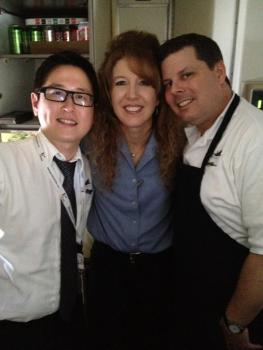 Steve, Carrie and Tom were the flight attendants on my flight from Nashville to Las Vegas in April 2012. The reason this picture didn’t go viral is because they did what Southwest Airlines is famous for. They made the flight FUN.

Actually, that’s an understatement of what these three did. They were a FREE comedy routine that kept the entire cabin in stitches. Totally hilarious. I don’t even remember another thing about that flight but them and how they made me feel.

Before I deplaned in Vegas for the annual BEA/NAB convention, I had to snap a picture of the three of them on my iPhone.

Southwest founder Herb Kelleher wrote his philosophy for starting Southwest Airlines in this must read book “NUTS!” Herb wanted to create a community of people who have a positive, joyful, engaging attitude that can throw caution to the wind and live a life of unabashed passion.

Author Tony Campolo put it this way: “NUTS! is about people who dare to love and who, in their loving, have found an aliveness that makes them more fully human.”

The Tragedy of Our Time

Herb Kelleher says that the tragedy of our time is that we’ve learned to love our techniques (technology) and use people. We’ve got it backwards.

“This is one of the reasons that more and more people feel alienated, empty, and dehumanized at work. When people feel loved, they love in return. Love is the most important emotion there is because it’s the one that allows us to enjoy — even to consider– all aspects of life.”

But when it comes to ranking airlines by complaints, Southwest is the country’s major air carrier with the best ranking for least customer complaints. Could it be because they show the love?

Last week I wrote about what makes a radio station unique and what it can do that other media can’t in the 21st Century. You can read that article here.

Technology has enabled many radio companies to put technology ahead of the love. This is a BIG MISTAKE. Radio is a people business. Take out the people and what do you have left?

I’d like to leave you with one final thought. Whether it’s you or your enterprise, guard your reputation.

Al Tompkins of the Poynter Institute just spoke at my university and he said something to us that his father always said to him about guarding your reputation:

“You make a reputation over time, you lose it overnight.”

11 responses to “Fly the Friendly Skies?”