The other evening, I watched the Netflix documentary “The Great Hack.” It chronicles how big tech is taking our data, that we freely give away online, by both making money with our information and manipulating us.

The documentary makes one realize there’s a lot for us to be worried about.

In an internet connected world, do we have any secrets? Everything about us is being stored, as we share our information via social networks, our credit card companies, our banks, our medical services – just about everyone we interact with online.

During the course of the documentary, professor David Carroll tries to see his data points as collected by Cambridge Analytica. Spoiler Alert: Professor Carroll wins a lengthy court case to obtain his data points. Cambridge Analytica never produces them but instead paid a fine and plead guilty for failing to do so. Not producing the data points was more important than revealing what they knew about Professor Carroll and giving the world an inside look at what they know about each of us.

Now Cambridge Analytica is liquidating to prevent anyone from ever seeing the data points they collected on anyone.

Our data privacy has always been important, but we’ve traded our privacy for speed and convenience in our internet connected world. The documentary points out that collecting and using our data points is a trillion dollar business that last year saw data surpass oil in value, making data the most valuable asset on earth.

What Cambridge Analytica did was target people whose minds they felt they could change for the purposes of winning elections for their clients. In the military, such a tool is called Black Ops or False Flag tactics. Its psychological warfare used to induce confessions or reinforce attitudes and behaviors favorable to the user’s objectives.

The advertising “mad men” of Madison Avenue came from the propaganda operations of the United States military during World War Two. They took what they learned and applied it to selling cars, refrigerators, homes, soap etc. Great advertising seeks to persuade the reader, listener or viewer to buy a product or use a service.

Is it any surprise to anyone that as social media was born, these same methods would be applied to this platform, only on a level that was not possible through traditional media?

“These platforms that were created to connect us are now being weaponized,” says Carole Cadwalladr, investigative reporter for The Observer newspaper. “It’s impossible to know what is what, because nothing is as it seems,” she adds.

Sara Fischer writes in Axios that the big tech companies like Facebook, Google and Amazon are consuming more advertising revenue than most other ad supported media combined. The reason? They have our data points and know how to effectively use them to get us to do what they want. You can read Sara’s full article HERE.

The eMarketer and Zenith Media data as graphed by Axios Visuals really shows where things are headed. (see below) 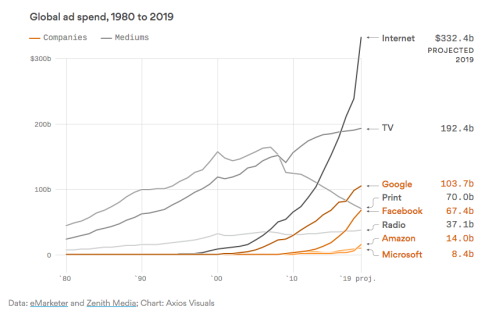 The playing field today is so unlevel, it begs the question, if traditional media – newspapers, magazines, radio, television – can even have a fighting chance to win advertising dollars.

As a consumer, do you think you stand a chance to not be influenced by the tech giants when they are using your own information against you?

I encourage you to go deeper in this subject by both watching the Netflix documentary “The Great Hack” and reading Sara Fischer’s column “Tech Giants Still Crush the Ad Market Despite Looming Threats.”

Then I hope you will share your thoughts in the comments section of this blog article.

The future of our world is being shaped by the lack of data privacy.

I’d love to hear your thoughts.

5 responses to “The Great Ad Hack”