The first mass-market car radio premiered in June of 1930, but due to a second World War it wouldn’t be until the 1950s that car radios became common.

Another factor that slowed their growth was cost. Those early six vacuum tube car radios cost around $130.

To put that into perspective, you could buy one of Henry Ford’s model A’s for $450.

The Galvin Manufacturing Corporation, founded by brothers Paul and Joseph Galvin, were early pioneers in car radios. Paul Galvin realized their radios needed a brand name and came up with the name of “Motorola,” a portmanteau (a word blending the sounds and combining the meanings of two others, for example motel (from ‘motor’ and ‘hotel’) or brunch (from ‘breakfast’ and ‘lunch’) of the words motor car and ola. “Ola” back then was a slang word for anything audio. 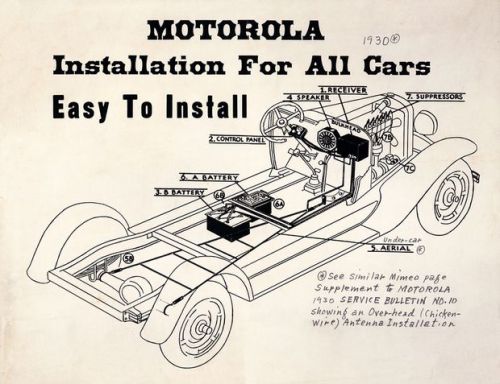 Motorola introduced the first dash-mounted AM car radios in the 1930s. It wasn’t until 1952 that a German company, Blaupunkt, would introduce the first FM car radio. AM/FM car radios followed the next year.

I was born in 1952, and like other Baby Boomers my age, radios and cars have always been one.

While transistor car radios were introduced in 1955, it wouldn’t be until the 1960s that they became affordable. It should also be noted that dashboard radios were still an option in 1963, however, they were a very popular option and more than 60% of all cars on the road in America had one.

I can still remember the time my parents were buying a new car and one of the decisions that they had to make was whether or not to add the new car radio option that had just come out, adding a rear speaker to the dashboard radio. 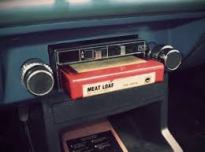 The first aftermarket option I remember my parents adding was that of an 8-track tape player. I loved this device because it allowed me to listen to air checks of my weekly radio show on my daily commute to college. I wanted to improve my style and presentation.

The 8-track tape players in cars would soon be replaced by cassettes, allowing people to make up their own “mix tapes” of songs they loved to hear most.

Compact Discs (CDs) eventually replaced cassette players in the car dashboard, and for those of us that didn’t want to change CDs, one at a time, it was a thrill having a six-CD changer located in the trunk that allowed for even more variety with the touch of a button.

Steve Jobs once said he wanted to be able to have a 1,000-songs in his pocket, and from that vision, came the Apple iPod. iPods could eventually be plugged into the car’s audio system and now offered a virtually unlimited supply of music and audio books at the touch of a button.

The iPhone would offer all that any iPod ever could, plus so much more. It became the computer in our pockets replacing a multitude of single use devices, including the car radio.

Today’s automobile dashboard offers occupants a complete entertainment center that immediately connects to a person’s smartphone via either Apple’s CarPlay, Google’s Android Auto, or a manufacturer’s proprietary system. Today the vehicle’s onboard entertainment system plays a big role in people’s car buying decision and it can also add from a thousand to two thousand dollars more to the price of a vehicle.

With the evolution of self-driving cars, you can expect that more and more vehicles will come with video capabilities as well as audio, and also that the competition for who can provide the best in-car entertainment will be fierce and passionate.

The global pandemic has caused two markets to significantly heat up:

Today’s reality is that people who now find themselves working from home, don’t want to be stuck in a little urban apartment and are moving to homes that offer more space to enjoy. Likewise. those individuals whose work demands they still commute, no longer feel safe on mass public transportation and are upgrading their ride.

Understanding how these changes will impact the future of your media enterprise is critical.

5 responses to “Car Radios & The Future”