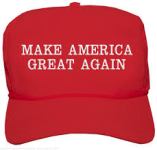 I’m not going to get into the weeds about the presidential election. But I do want to weigh in about marketing and promotion.

I read that Donald Trump spent more on those “Make America Great Again” red ball caps than he did on any other part of his campaign. I also know that in the fly-over states his lawn signs were also prolific.

I bring this up because I remember when radio stations promoted themselves prolifically as well.

Roy H. Williams taught me long ago in writing persuasive radio commericials that if you win a person’s heart, their mind and pocketbook will follow. People first are hooked by their emotions and then justify their actions logically.

Pick any sports team, in any sport, and you will see team fans proudly wearing their favorite team’s hats, shirts, colors.

Colleges also understand the importance of school spirit through the display of all kinds of wearables.

Radio used to own the bumper sticker market. One radio station I especially remember was WOBM in Toms River, New Jersey.

This simple white on blue bumper sticker was seen on virtually every car at the Jersey Shore when I moved to Atlantic City in 1984.

But many of these station branded items seem to have been eliminated as budget cuts forced a leaner, meaner operating style.

These days one of a radio station’s biggest expenses is audience ratings. The expense line for station branded items I’m sure pales by comparison.

The Federal Election Commission filings show that Donald Trump’s presidential campaign spent around $1.8 million on polling from June 2015 through September 2016, but spent $3.2 million on hats. Polling like audience ratings don’t touch anyone on an emotional level (except maybe the manager when the bill comes due).

Is there a lesson for radio here?

What’s Ahead in Your Life

Everyone wants to know what the future for them will be. It’s why fortune tellers with crystal balls and astrology forecasts have been so popular.

Lennon Got It Right

John Lennon of the Beatles came closest to predicting the future when he said “Life is what happens while you’re making plans.” I experienced this just recently. I had planned out my talk for the 69th annual New Jersey Broadcasters Association convention and gala in Atlantic City when while on route I received word that my mother-in-law aka “Mom” was taking her last breaths. The two days I had planned were now dedicated to a wake and funeral.

What is planning but trying to predict the future, trying to create a future you want and manipulating events to try and ensure the future comes out the way you want. At best, planning is shaky; at worst, a big waste of time.

No One Can Predict the Future

Soon every radio company will call their senior managers together for the start of the budget season. Budgeting is the way companies try to predict the future. Only they can’t. Never have. Never will. At best, budgeting is roadmap to where a company would desire to end up when the New Year is over. The Baby Boom (of which I’m a card carrying member) was supposed to create massive unemployment. It didn’t. Even with another unforeseen event – women in the workforce – the labor force in America grew by forty percent while number of jobs grew by fifty percent.

In my working life in radio, I have watched the prognosticators tell me almost every year that the newest shiny thing that had come along would be the end of radio. Like the 8-track tape player, then the cassette player, then the CB Radio (not 10-4, good buddy), then the CD player followed by the CD changer, then the car phone, the MP-3 player, the smartphone, followed by satellite radio and finally streaming audio. So what’s the latest report say about the use of radio by Americans today? It’s the most ubiquitous form of mediated communications on the planet today.

Predicting the Future Should Be Dead

VCRs didn’t kill movies. Television didn’t kill books. The internet didn’t kill direct mail (aka junk mail). If you study fractals, what you learn is that they grew out of chaos theory and that theory is based on the unpredictability and randomness of everything. This reminds me of something Paul Harvey used to say when the world confounded him, no use worrying about anything because nothing will turn out alright.

Here’s How to Plan

Planning has always been a singular path in the companies I’ve worked. The problem is people. People are unpredictable. Radio, TV and mediated communications are people businesses. Planning should be a process that includes several possibilities. I always called it “a Plan B, C, D etc.” In other words, you need plans, not a plan. You need to build unforeseen possibilities into your planning process.

Albert Einstein put it this way:

“The universe is not only queerer than we suppose.

It’s queerer than we can suppose.”

Tagged as Albert Einstein, Audience Reach, budgets, How to Budget, How to Plan, John Lennon, Radio is Dead, The Future

The Limitations of a Spreadsheet

This is probably going to make me sound ancient, but I remember doing my radio station budget with a calculator, a #2 pencil and a Big Pink eraser. I wasn’t alone; everyone did their budgets this way once upon a time.

In those early days of computers entering the radio station, the first department I remember computerizing was the traffic department. Oh, I so remember our doing that transition.

We were going into our first holiday weekend, that time when traffic needs to prepare five traffic logs for each radio station to get through a three-day weekend. What was supposed to make us fast and efficient saw us spending time going into Saturday to get the logs done. I remember the look on my traffic director’s face. It was one of those “are you going to make me do this again” kinds of looks. (I did)

Computers weren’t really all that fast in those early days, but the promise was clearly there that this would be a better way over time.

Seeing budget time coming up, I said to my business manager, let’s take a course at the local community college in Excel and do our budget this year on a computer. She loved the idea and the two of us went back to school to learn how to use Excel spreadsheets.

We cranked out our first budget and it was amazing. It was clean, easily read and best of all it showed that we were going to have a great year for the company.

Everything was great, until my boss, one of the two owners of the group showed up to review my budget. He was NOT impressed that we had computerized the process. He basically said I don’t care how it looks or what it says, but is it right. He then proceeded to take a calculator out of his pocket and crunch the numbers. Very quickly he found all kinds of errors.

The bad news was we hadn’t mastered the Excel spreadsheet in our first attempt doing our station budget on this computer program. The good news was we were able to fix all the problems and hand my boss a revised budget for him to take back on the plane to the home office.

The following year, the home office announced that all radio stations in the group were to do their station budget on Excel.

Spreadsheet programs, as it turns out, can allow us to manage a lot of numbers and monitor what’s going on in our businesses. They are invaluable, but not omniscient.

It was Benoit Mandelbrot who first said that economic analysts were too dependent on “Joseph effects” which means things happen in a continuous and predictable model and turning a blind eye to “Noah effects” which creates chaos and completely destroys those same models.

Another way of saying it is that when something doesn’t fit your nice little model, just ignore it. That’s never been a solid plan. It’s why people don’t often see stock market crashes coming or innovations like the iPhone, the Internet and WiFi, but these things always happen and when they do they steer the course of history.

Remember the financial crisis of 2008? Mandelbrot understood how things like this happened. (Noah effects)

In the world of radio today, we have BEATS 1, Pandora, Spotify and others. Over-the-air broadcasters did not see these “Noah effects” on their data driven and ROI focused spreadsheets. They were living in “Joseph world.”

In his new book “Team of Teams” General Stanley McChrystal tells the story of when he took over Special Forces in Iraq. Specials Forces was winning every battle but America was losing the war. McChrystal learned that the problem wasn’t that his teams weren’t doing their jobs right but that they weren’t doing the right jobs.

McChrystal says “In complex environments, resilience often spells success, while even the most brilliantly engineered fixed solutions are often insufficient or counterproductive.” For many radio companies the problem isn’t that they’re not performing to plan, but that the plan itself is flawed. It often is based on assumptions that don’t hold true in every radio market the company operates in.

The answer to this problem is to hire great leaders and let them lead.