What is The Future of Radio?

Ten years ago, I was in Las Vegas presenting at the Broadcast Education Association’s annual international conference. My presentation was called “This Changes Everything.” It outlined things that would be changing in our world in the decade to come.

“Prediction is difficult…especially about the future.”

Groupon, which came into existence only a couple of years earlier, grew its revenue to over $1.6 billion in 2011. And yet, the doomsayers were already forecasting its demise. As this chart shows, revenues for Groupon did drop below 2011, but not until 2020.

A contributing factor to this downward revenue trend for Groupon might be that it’s estimated that only about 1% of Groupon users ever became regular customers of the businesses whose coupons they used.

As we begin the third decade of the 21st century, we know that the previous decade will now be known most for the impact of Facebook, not Twitter, when it comes to social media dominance.

In 1920, the adoption rate for commercial AM radio was incredibly fast, only to be eclipsed by the introduction of TV. However, both of these two forms of communication would be dwarfed by the adoption rates of the internet followed by the use of mobile internet made possible by the smartphone.

These last two brought about revolutionary changes in how we communicate.

How the World is Connected to the Internet

At the beginning of the second decade of the 21st century, 85% of the world’s population connected to the internet via wireless mobile devices.

To put that into perspective, only 80% of the world was connected to an electrical grid in 2011.

Today, 92.6% or 4.32 billion people connect to the internet wirelessly.

Top Three Gadgets of All Time

A decade ago, The History Channel came out with a list of the “Top Gadgets of All Time” and they were:

None of these things were a secret, but it was Mary Meeker that tied all of these changes together in her presentation “Internet Trends 2011.” Her presentations are worth your time to view. The most recent one being 2019, before COVID19 disrupted everything. You can view that presentation HERE

What we do know is COVID19 took all of the changes that were slowly taking place and accelerated them dramatically. Think “warp speed.”

The big three takeaways from 2011 were:

What Technology Might a Baby Born Today, Never Use?

Let me throw out some thought starters for you to consider. Please feel free to add to this list.

So, What’s the Future of Radio?

Then Fred Jacobs came out with a blog this week about the seemingly bleak future for AM/FM radio in cars. You can read that HERE

At the annual CES (Consumer Electronic Show) Fred’s been asking about the future of car radio every year, and noticed that more recently auto manufacturers are reluctant to give a direct answer if there might come a day when AM/FM car radios won’t be standard equipment.

For Elon Musk and Tesla, that day is already here.

How to Build Brands

Ernest Dichter is known as the father of motivational research. Over 50 years ago he did a large study on word-of-mouth persuasion that revealed the secrets of how to build brands. Dichter said there are four motivations for a person to communicate about a brand:

“Win the hearts of the people, their minds will follow.”

So, if you are in the radio business, OR are a radio listener, the question you need to honestly ask yourself is:

How does your brand measure up?

Your Attitude Determines Your Altitude

In life, more than any other factor, your attitude pretty much determines where you will go… and how far you will go.

The Cambridge Dictionary defines attitude as “the way you feel about something or someone, or a particular feeling or opinion.”

When I entered the classroom, I brought what I knew about attitude from my years of managing to education. I knew that one’s attitude is contagious.

More recently I read about the work of Margaret McFarland, a professor of child psychology at the University of Pittsburgh. Ms. McFarland put it this way, “attitudes aren’t taught, they’re caught.”

“If a teacher has an attitude of enthusiasm for the subject, the student catches that whether the student is in second grade or is in graduate school. If you show them what you love, they’ll get it and they’ll want to get it,” McFarland says.

I know that many of my students used to tell me how they loved my excitement and enthusiasm that I displayed in sharing the material I was teaching.

When I departed for my first solo general manager position in Atlantic City, my co-GM back in Massachusetts gave me these words of wisdom, “Whatever your attitude is, when you enter the radio station each day, will become the attitude of your fellow employees. Keep your problems to yourself and always maintain a positive, upbeat, enthusiastic attitude.”

It may have been the most important management advice of my forty-year radio management career.

Whenever any of my radio stations made a hire, my department managers did all the preliminary screening of candidates. When they had narrowed the field down to two or three finalists, I would meet with those people before a final hiring decision was made.

What was I looking for in my meetings? The person’s attitude.

I knew that in virtually all positions, we could quickly train someone to do the job. However, what we could not change was the attitude of the person.

Hire the people with the best attitudes and train everything else.

“A brand is shorthand for the customer’s expectations.

What promise do they think you’re making?

If you have true fans, the only reason you do is because

the group has engaged with you in a way that signals

that they expect something worthwhile from you next time.

Attitude in Your Brand

People love your brand, or they don’t, based on how they feel about your brand emotionally.

The passing of one of my mentors, albeit one I never met, Herb Kelleher, founder of Southwest Airlines, brought to mind how important employee attitude was in building America’s most successful airline.

Herb Kelleher didn’t believe the customer was his first priority, he believed his employees were.

And if you treat your employees right, guess what?

Your customers come back, and that makes your shareholders happy.

Start with employees and the rest follows from that.”

According to U.S. government data and company records, Southwest has enjoyed 45 consecutive years of profitability, and in 2018 carried more domestic passengers than any other airline.

Herb Kelleher said the secret to Southwest Airlines success, was one thing, “culture.” When you cultivate a good attitude in yourself, and when as a manager you hire people for their attitude, what you end up creating is a culture.

What kind of culture did Herb create at Southwest? The employees and retirees of Southwest Airlines placed a full-page ad in the Wall Street Journal in tribute to Herb upon his passing this month. Here’s what they wrote: “Dear Herb, Thanks for always remembering our names. For keeping our airline flying high and our spirits higher. For always being there. For giving everyone (and we do mean everyone) a kiss on the lips. For arm wrestling for our slogan. For being both the hardest worker and the life of the party. And for turning a company into a Family. We will be forever in your debt, and we will aspire to keep your spirit alive. With love and gratitude, -The Employees and Retirees of Southwest Airlines” 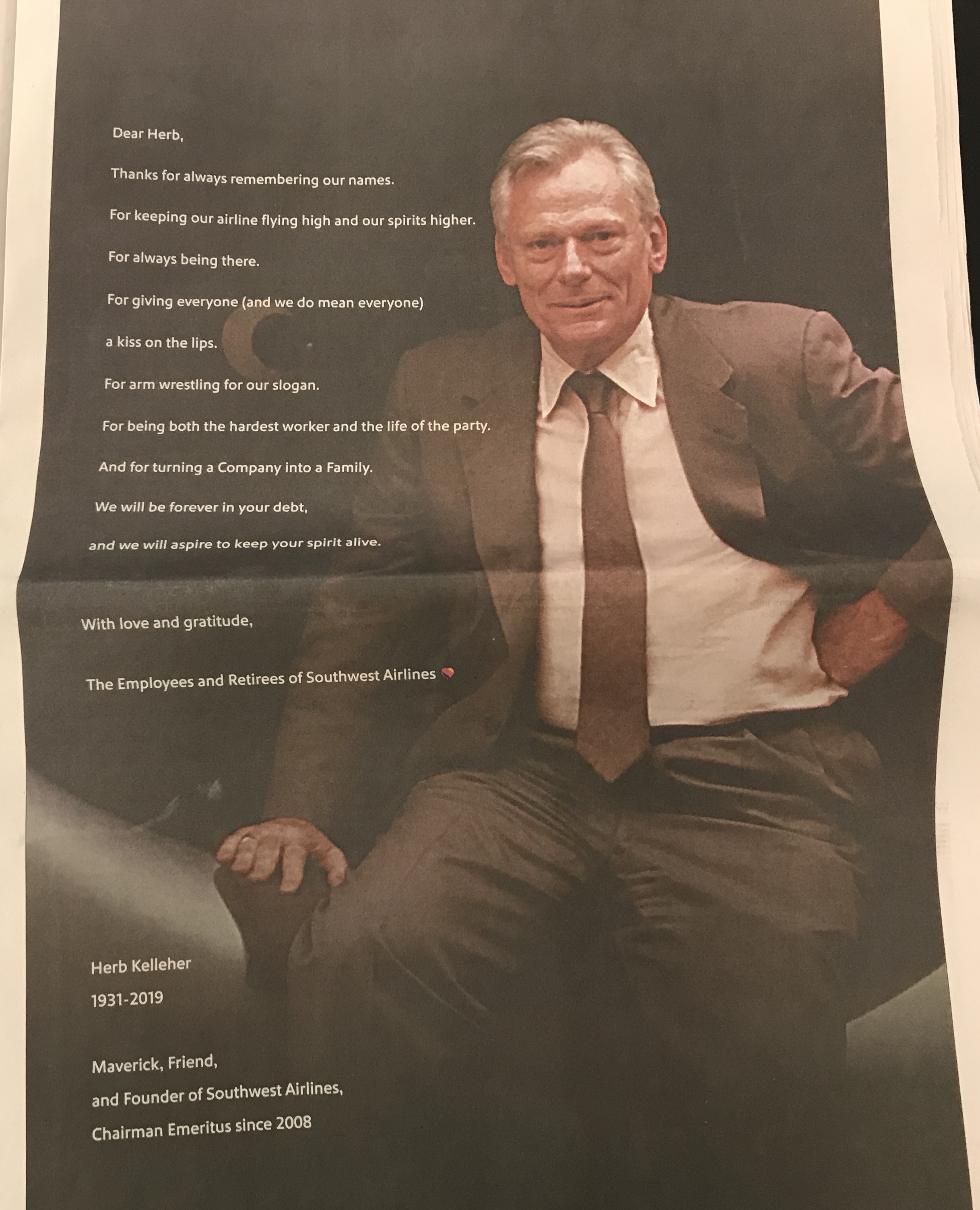 Is it Time for a Checkup from the Neck Up?

What will the people who work with you, or for you, say about your attitude?

Is it time for you to change that?

What better time to begin cultivating a good attitude than with the start of a brand new year.

Step one is to be sure you’re doing what you love, because as Herb Kelleher said, “If you’re crazy enough to do what you love for a living, then you’re bound to create a life that matters.”