What We Have Here, Is a Failure to Embrace Complexity 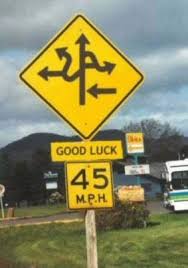 The world we live in today is a complex place. The KISS operational style seems like it would be a good idea. (KISS = Keep It Simple Stupid) But maybe not.

Turns out in a complex world, being agile is more importance than being efficient. Being efficient kills innovation. Innovation today is the primary driver of building value and creating value is one of the basic reasons for any organization to exist.

People who can manage complexity will be the leaders of the future. Managing a radio station was complex due to the fact that radio has two customers, which want totally opposite things. One customer is the radio listener. This customer wants information and entertainment. This customer usually isn’t fond of commercials. The other customer is the radio advertiser. Anytime their ad isn’t dominating the airwaves and driving consumers into their store is a moment the radio station isn’t doing its job. To add to this complexity are the talented people needed to service both of these customers. Air personalities that attract listeners and sales folks that service advertisers.

As the radio industry began consolidating after the Telcom Act of 1996, the traditional thinking of protecting margins was amplified. This resulted in reducing labor costs. RIFs became commonplace (RIF = Reduction In Force). For those that were left wages became stagnant, little money was invested in training and the number of people left in the workforce was reduced to a bare minimum.

The problem is, when you have low paid, poorly trained and overworked people, your operation lacks new and innovative ideas that can improve the business. When the only ideas that are introduced come from the tippy top, they rarely connect with the challenges seen at the front line.

Zeynep Ton writes in her book The Good Jobs Strategy about a discount retailer that took a different approach to their operation than most companies when the great recession of 2008 struck the world. Rather than cut wages or reduce staff, Ton says they asked their employees to contribute ideas. The result was that this company managed to reduce prices to their customers by ten percent while increasing their market share from 15% to 20% from 2008 to 2012.

Herb Kelleher writes in his book NUTS! about how Southwest Airlines created a culture where employees are treated as the company’s number one asset. Southwest does a number of things to benefit its employees, including such programs as profit-sharing and empowering employees to make decisions. This empowerment during the period when oil prices hit a high of $145 per barrel in 2008 saw the Southwest pilots taking the initiative to plot more efficient flying altitudes and work with ground crews to get in and out of the gates quicker to control the Southwest ticket prices and not lay off any people while maintaining a positive profit margin. These actions did not come from the corporate home office but from employees in the field.

What to Do When You Have Maximized Efficiency

Let’s face it; the ability for any radio operator today to squeeze out any more profit through efficiency is over. Radio consultant George Johns puts it this way: “Radio today is in the no business, it has no money, no time and no people.”

So what’s the answer? Collaboration.

The radio companies of the 21st Century will need to develop the ability to make collaboration a competitive advantage. The game has changed from what you own and control to what you can access. Access happens via platforms. Radio needs to create platforms that bring consumers and producers together, much like the Apple App store does globally, but locally for their service area.

Radio needs to find a way to attract listeners by causing them to be fearful of missing something if they’re not listening while directing them to local places via platforms they control that can fulfill their wants and needs on demand.

In other words, radio needs to “think different.”