Are We Killing the Golden Goose? 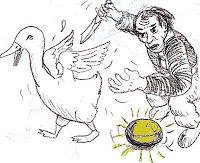 Do you remember Aesop’s fable of the goose that laid the gold eggs? Let me refresh your memory of this tale. It’s about a farmer that was poor. One day he makes a startling discovery when he finds a golden egg in the nest of his pet goose. Skeptical at first, he has the egg tested and finds that it is indeed made of pure gold. Even more amazing, each day this farmer awakes to find that his goose has laid another golden egg. In very short order, this poor farmer becomes fabulously wealthy. But then his wealth brings greed and impatience. No longer satisfied with just one golden egg per day, the farmer cuts open his goose to harvest all of its golden eggs at once only to find the goose is empty inside. With a now dead goose, there will be no more golden eggs laid.

In remembering this fable, it sounded so familiar to the world of radio broadcasting. A radio station was like a wonderful “goose” that laid daily “golden eggs” for many an owner. It was an industry joke that having an FCC broadcast license was like having a license to print money. It was “golden.”

But broadcasters not wishing to wait for each day’s golden egg, cut open their goose with the Telcom Act of 1996. Twenty years ago, this act deregulated radio and now owners, like the farmer cutting open his goose to get all the eggs at once, now could own as many radio stations as they basically wished.

And how did that work out? Not much better than what the farmer discovered.

The moral of Aesop’s fable is if you focus only on the golden eggs and neglect the goose that lays them, you will soon be without the very asset that produces the golden eggs.

The radio industry’s quest for short-term returns, or results, took their free FCC licenses and ruined them by not maintaining the balance between the production of desired results and the production capacity of the asset.

Aesop’s fable is the very principle of effectiveness. It’s a natural law. Like gravity, you don’t have to believe in it or understand its principles, but you can never escape its effects.

Radio broadcasters probably saw the moral of the fable being the more geese you own, the more spots you add to the hour, the more effective your R.O.I. (Return On Investment) will be. But ironically, it was the principle of “Less Is More” that in the end rules the day.

To be truly effective, you need to maintain the balance of what is produced (golden eggs/revenue) and the producing asset (your goose/radio station).

Stephen Covey wrote extensively about all of this in his book “The Seven Habits of Highly Effective People.”

“When people fail to respect the P/PC Balance in their use of physical assets in organizations, they decrease organizational effectiveness and often leave others with dying geese.”

One could certainly make that case for two of America’s largest radio broadcasters today. They are reaping the results of those who’ve gone before them who’ve in essence liquidated the asset, before they took over and now the accounting system appears to show that they are not performing at the level of their predecessors. But is that really the case? Did they in reality inherit a very sick goose when they took over? The debt problem say many who are more schooled in this area of high finance than I, will probably be addressed with a re-set. And once that happens, it will come back to the people of radio.

Covey says to “always treat your employees exactly the way you want them to treat your best customers.” Herb Kelleher at Southwest Airlines built his company on this very Covey principle.

“If you hire people just because they can do a job,

they’ll work for your money.

But if you hire people who believe what you believe,

they’ll work for you with blood and sweat and tears.”

13 responses to “Are We Killing the Golden Goose?”